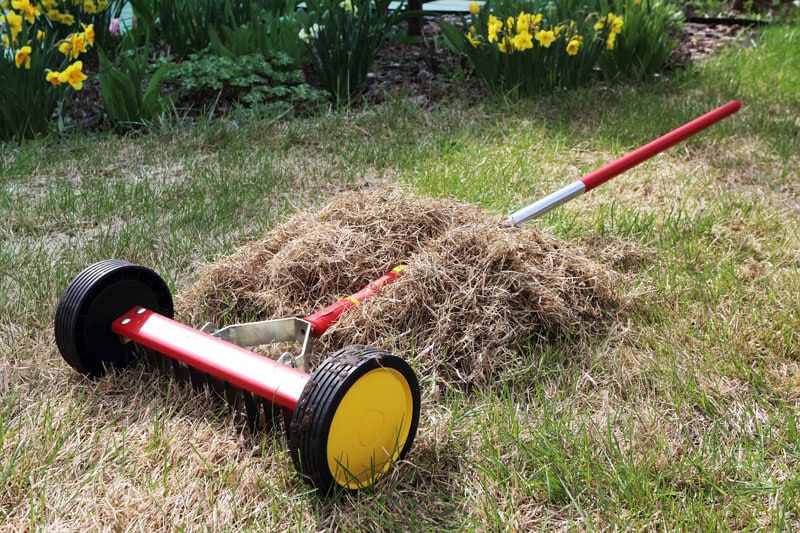 thick thatch layerSo, you have heard from a neighbor or maybe at the plant nursery that aerating your lawn is important for good lawn health. Another friend of yours says that dethatching your lawn is what you need to do.

Here we will break down the similarities and differences between dethatching and aerating and provide guidance on how to determine when to do either.

Related Article: Power Rake vs Dethatcher: What Is The Difference?

First, a bit about roots

To understand the need for either dethatching or aerating, you need to understand a little bit about plant roots. In grade school, many of us were taught that animals breathe oxygen and plants breathe carbon dioxide.

That last bit is completely false. I remember growing up hearing about plans to terraform Mars with mass plantings of trees to “breathe in” all the carbon dioxide and release oxygen. Complete nonsense.

Plants breathe oxygen. Take a look at any plant cell under a microscope (with a proper histological stain) and you will see several sets of organelles, including mitochondria and chloroplasts.

Chloroplasts “fix” carbon taken from sequestered carbon dioxide and convert it into chains of carbon to make sugars using the energy harvested from sunlight. Mitochondria in plants, just like your mitochondria in your cells, consume oxygen to drive a series of ion pumps to produce energy for the cell.

What’s this have to do with dethatching and aerating? Well, plant roots breathe oxygen.

Ever overwater a houseplant, only to find a week later that it breaks off dead at the soil surface? That’s because when you drown the roots you caused them to suffocate and die.

Plant roots breathe best in soils that have between 40-60% air space and thrive best in clay loams or sandy loams. Anything less, as far as air space, stunts root development and plant vigor.

Both processes of dethatching and aeration aim to improve access of roots to air and assist in improving plant vigor and growth. Below, we will draw distinctions between the two processes and provide tips on when and when not to do them. 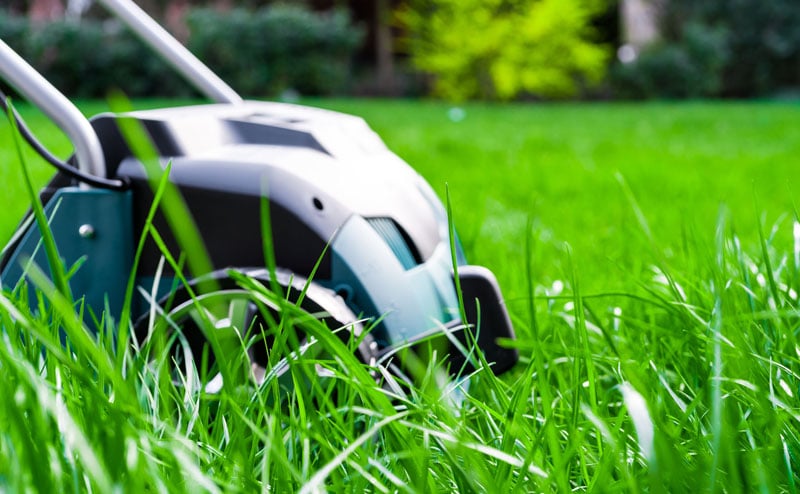 Thatch consists of the dead organic matter (grass, leaves, flowers, and fruit) that accumulate on the soil surface in your lawn. It is a good thing.

Thatch gradually decays into humus, which adds nutrients to the soil. That is a main reason why mulching blades (for example, the MaxPower Universal Gold) have become so popular for mowers. Cut the lawn, but put cuttings back in the lawn.

A thick mat of thatch helps to hold moisture in the soil and buffers the effects of drought conditions for your lawn. It also acts as an insulation barrier, reducing soil heating during the day to maintain more ideal soil temperatures for grass growth (50-65°F for cool climate turf grasses, 64-85+°F for warm climate turf grasses).

Too much of a good thing is not good at all. An excessively thick thatch in your lawn will reduce oxygenation of the soil by acting as a physical cap or barrier and will reduce the bacterial growth which is needed to assist in the breakdown of organic matter.

A thick lawn thatch also tends to promote shallow root system growth into the thatch. During heavy rains, the thatch will retain water, which will restrict oxygen access to the deeper root bed and drown the roots in the thatch.

Thatch has a tendency to heat up quickly under hot conditions and also dry out quickly. This will leave the roots growing in thatch vulnerable.

Soil topdressing is a method of spreading a thin layer of soil over the turf (compost or Michigan Peat). This is usually preceded by coring (aeration).

The procedure brings soil in better contact with the thatch to increase microbial decomposition, thus thinning the thatch. Typically, this is part of a longer-term solution used also to improve soil health.

Apply thin layers of soil in the early spring. Several applications of thin layers are much better than a thick layer, which leads to a lot of other problems.

Keep layers to ¼ inch or less and apply every 2-3 weeks. Rake in the soil gently.

2. Hand cultivation with a thatching rake

A thatching rake is a manual gardening tool that is appropriate for dethatching small lawns. They can be easily found at your local hardware store or online (such as the rake by True Temper).

The blades of the rake are used to loosen and pull up the thatch layer. Rake across the turf until the surface soil can be seen, then remove the loosened thatch.

A power rake resembles a large mower and is typically used only by lawn care companies (such as the Billy Goat PR550H). Its operation must be carefully conducted to prevent permanent damage to the lawn, so leave it to the professionals.

Under the machine is a rotary bar with tines which do the same job as your manual thatching rake, just under power. This option should be used (1) if dethatching is necessary (thatch is thicker than 1 inch) and (2) if you have a large lawn where manual dethatching is just not feasible.

A vertical mower resembles a tiller and is actually a type of shallow tiller (such as the SunJoe AJ801E). It will dethatch the lawn by cutting parallel swaths through the turf and thatch.

This removes thatch and exposes deeper soil for good aeration. However, its use is traumatic to lawns and with a lot of root mass breakage, lawns will temporarily yellow.

The upside is that a healthy lawn will recover quickly.

Press down on the turf with your hand. If it feels like a mattress (bouncy, spongy), there is a substantial thatch mat in your lawn.

Spread the grass and look for new grass shoots. If the mat is thick, new shoots will not be able to grow and reach sunlight.

If it is densely matted, shoots will not be able to emerge at all. Dethatching is necessary. This should be performed during spring growth.

If the thatch is less than ¾ inch, this indicates a healthy lawn and dethatching is not recommended. 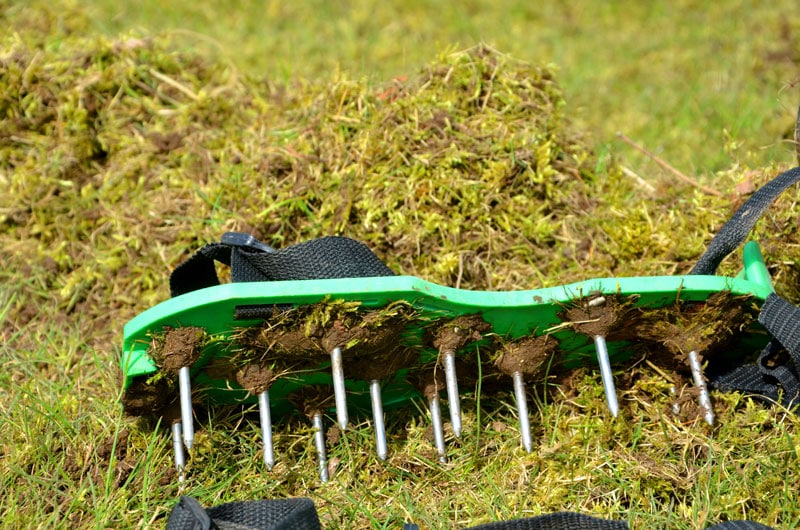 Aeration involves periodically cutting small, ½-inch plugs from the turf. This is typically performed with a power walk-behind or a tow-behind machine (for example, the AgriFab 48-Inch). I cannot fathom doing this manually, but there are manual aerators (Jumbo Varieties Lawn Aerator Shoes).